Deviated Septum and Its Correction (Septoplasty) 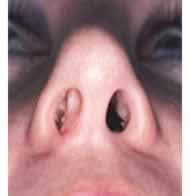 Often, a patient presents to their ENT surgeon for symptoms of nasal obstruction. Though nasal obstruction may be due to adenoid hypertrophy, turbinate hypertrophy, and allergy which often obstruct both sides of the nose, sometimes the nasal obstruction preferentially occurs on only one side. If such unilateral obstruction is present, a deviated septum is the most common culprit. However, both sides can also become obstructed if the septum deviates to one side anteriorly and than to the opposite side posteriorly. Sometimes, the deviation may be so severe that it blocks the sinuses leading to recurrent sinus infections. Other deviations jut out in one spot (septal spur) and press into the face resulting in persistent pain/pressure over the cheek and around the eye; a phenomenon called Sluder's Neuralgia. Individuals with a deviated septum are also more prone to nosebleeds (click here for an explanation why). Nasal obstruction from a deviated septum can be constant if the deviation is severe enough or intermittent. 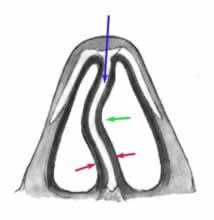 What is a Nasal Septum?

A nasal septum is an approximately 3 X 1.5 inch wall inside the nose that divides the right side of the nasal cavity from the left side (blue arrow in cartoon to the left). The nasal septum is composed of cartilage in the front and bone in the back of the nose. Ideally, this nasal septum should be straight to allow symmetric airflow into both sides of the nose. If the septum is deviated as shown in the cartoon illustration (green arrow), one side becomes more narrow resulting in nasal obstruction on just that side (figure from EVMS). The red arrows point to the nasal mucosa lining the septum. It is possible that the septum could be deviated to BOTH sides if it first buckles over to one side and than buckles to the other side (shape of an "s") resulting in nasal obstruction on both sides.

Sometimes, the deviated septum can be quite obvious as shown in the picture of an actual patient up top. More often, septal deviations are located further back in the nose and not as readily apparent. Recall from the last paragraph that the septum can extend as long as 3 inches into the nose away from the nostril. As such, the septal deviation can occur anywhere along this entire ~3 inch length. Such posterior septal deviations can only be seen on nasal endoscopy. As such, it is not unusual for an ENT to perform this specialized procedure at an initial visit to evaluate a given person's complaint of nasal obstruction.

It should probably be pointed out now that septal deviations at the entrance of the nose as shown in the picture up top may actually require a more extensive operation (septo-rhinoplasty) rather than the standard septoplasty described below which deals with deviations further away from the entrance.

GREAT! So I have a Deviated Septum. What's the Next Step?

The only way a deviated septum can be fixed is surgery and is NOT recommended to be performed until after adolescence when the nose stops growing. There are no medications that can correct what is essentially an anatomic problem. But what medications can do is make it a bit easier to breath through the nose by decreasing any swelling inside the nose to maximize what little opening is present to be as large as possible. Such medications include steroid nasal sprays and other allergy-type medications. Should surgery be decided on, the procedure to correct is called septoplasty. The steps of a septoplasty are shown below: 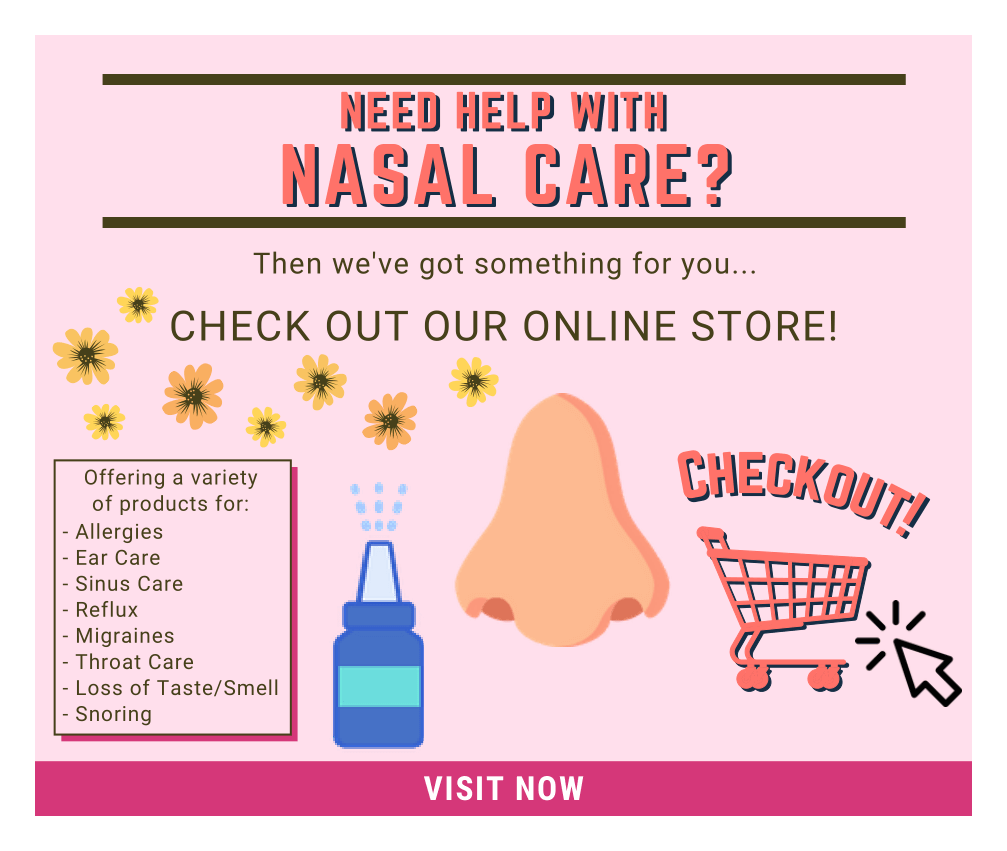 Recovery from septoplasty is about 1 week long. Most patients are surprised by how little pain there is after surgery. There is NO bruising or swelling of the face or external nose. The main biggest complaint after surgery is typically sino-nasal congestion and drainage that may last as long as 2-3 weeks. Why? Surgery of the nose is kind of like getting punched in the nose. There's internal nasal swelling that may occur from "surgical trauma" which often causes these symptoms. Over time, these symptoms WILL slowly resolve. It should be pointed out that this internal nasal swelling does not happen to everybody.

There will also be no change in your appearance after surgery compared with before surgery. Why? The analogy would be a house where the appearance on the outside would not change even though you may knock down a wall between two rooms inside the home.

So that in a nutshell is the explanation for why deviated septum surgery does not change the outside nasal appearance. Surgical procedures that DO change the outside appearance of the nose is called a rhinoplasty or nosejob. Such procedures include making a narrow nose wider, fat nose thinner, removing a nasal hump, or making a curved nose straight.

Often, a given patient's nose may have more than one problem contributing to nasal obstruction such as a very narrow nose, turbinate hypertrophy and/or adenoid hypertrophy. It is not a problem to perform other surgical procedures simultaneously to completely address all the factors that lead to a person's nasal obstruction.

If a deviated septum is affecting your life, please call our office for an appointment.