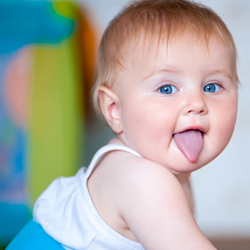 Babies make all sorts of unusual cute sounds, but one sound that is not cute is a squeaky or some other type of noisy sound that occurs with breathing, specifically with inhalation. This sound called stridor is due to a "floppy" airway known as laryngomalacia. This alarming sound typically occurs only with inhalation and more prominently when crying, feeding, or some other type of exertion. Depending on severity, it may also occur at rest or even while sleeping. Typically, most parents describe an intermittent "noisy" breathing (lower pitched and guttural) when at rest that turns into more of a high-pitched squeak with exertion.

Other related symptoms which may or may not be present include:

• Turning blue
• Reflux leading to a "wet" sound in the throat region (phlegmy, mucus throat)
• Skin retractions immediately above and/or below the sternum that occurs in time with stridor (suprasternal or subxiphoid)
• Difficulty feeding and poor weight gain
• Choking while feeding

These symptoms may be present at birth, but typically becomes more obvious around 3 weeks of age, mainly because newborns within the first 1-2 weeks of life are not able to breath forcefully enough to create the typical stridor / noisy breathing sounds until they are older.

Thankfully, 90% of infants outgrow this problem by 18-20 months of age.

However, if the laryngomalacia is severe enough, surgical and/or medical intervention will be required.

Beyond history and exam, a trans-nasal endoscopic exam is required to definitively diagnose this condition. This exam is performed without any sedation in the office. It is performed by threading a thin spaghetti-like noodle through the nose down to where the voicebox is located.

Often, this exam is performed with audio and video recording so that it can be played back in slow motion.

Watch Video of an Infant with Laryngomalacia

What Causes the Noisy Breathing?

Normally, breathing is quiet as there's nothing obstructing air from passing through the nose into the lungs. However, with laryngomalacia, the entry of air through the voicebox is partially obstructed. With the smaller than normal opening, it causes a squeak when air passes through just like a whistle.

The reason why breathing is quiet on exhalation is because air blows open apart the area of partial obstruction. The reason the sound only occurs on inhalation is due to the one-way nature of the obstruction like a door which can only open and close in one direction (inward OR outward into a room, but not both directions).

Take a look at the images below comparing normal, mild, and moderate laryngomalacia. Severe is basically where no airway opening (red dot) can be seen. Each of these images were obtained when the infant was inhaling.


In the normal picture, air goes between the vocal cords (green dots) into the windpipe (red dot) before ending up in the lungs. The purple dots are the arytenoids (joints that move the vocal cords) and the blue dot is the epiglottis. As you can see, as the severity of the laryngomalacia increases, the airway becomes more obstructed leading to correspondingly increase in noisy breathing and symptoms. In the moderate severity, the mucosa of the arytenoids (purple) are even touching together obstructing the airway to the point one can barely seen the windpipe (red) and vocal cords (green). In the severe case, the epiglottis has folded together like a taco to the point complete obstruction has occurred so one cannot even see the airway, arytenoids, nor the vocal cords.

You can watch a video of an infant with moderately severe laryngomalacia here.

With laryngomalacia, the infant has to work harder to pull air into the lungs creating greater than normal negative pressure in the throat region. This negative pressure may get transmitted into the stomach and exacerbate or even cause reflux by pulling stomach contents up into the throat region like someone sucking on a straw (except the straw in this situation is the esophagus).

As such, these affected infants often need to be placed on reflux medications like zantac to avoid throat injury and in severe cases, lung inflammation from soiling due to silent aspiration of reflux juices.

Try to keep infant upright and when sleeping, avoid laying on the back which exacerbates symptoms of laryngomalacia.

90% of the time, infants with laryngomalacia can be managed WITHOUT any need for surgical intervention.

Surgical intervention to treat laryngomalacia is called supraglottoplasty. This procedure is performed only if the symptoms are such that it is adversely affecting the health of the infant to a significant degree. Typically, that entails symptoms of:

To prevent airway stenosis due to scarring, the excisions are performed such that they are not adjacent to each other. Take a look at the images below using the moderate and severe laryngomalacia examples from above. Excisions are denoted by the red lines. Green lines denote mucosal division in order to separate the arytenoids away from the epiglottis.

With surgery, symptoms should improve significantly, though typically does not completely resolve (may still have some residual noisy breathing).

Please keep in mind that in our practice, we are not able to offer surgical intervention for laryngomalacia as postop pediatric ICU observation is required (Fauquier Hospital does not have a PICU). We will refer such infants who require surgical intervention to a facility where it can be performed safely.